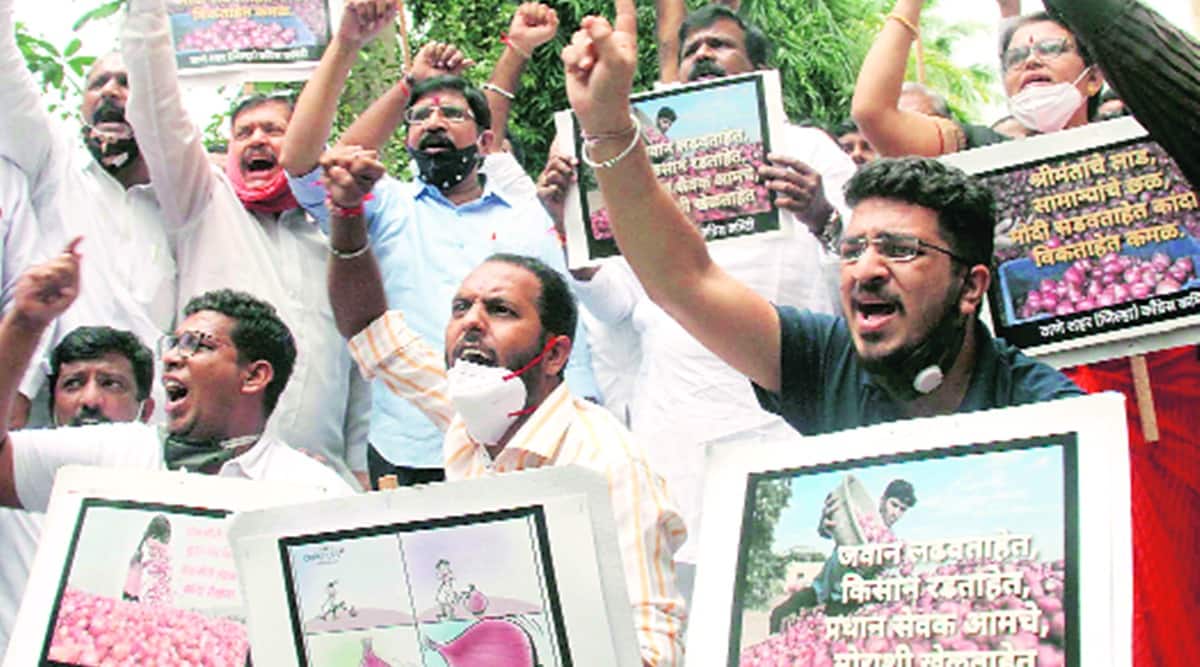 Protest against the central government’s decision to ban export of onions, in Thane on Wednesday. (Photo by Deepak Joshi)

Chief Minister Uddhav Thackeray on Wednesday said he would write to the Centre immediately to lift the export ban on onions.

Former chief minister and Opposition leader Devendra Fadnavis on Wednesday wrote to Union Minister for Commerce and Industry Piyush Goyal, requesting immediate lifting of the ban on onion exports. Fadnavis also held a telephonic conversation with Goyal to explain to him the unrest among farmers due to the Centre’s decision.

“Maharashtra, which is the biggest onion producing state in the country, also exports onion. The demand for onions grown in Maharashtra is high globally. Therefore, the Centre should consider the request,” he said.

The Shetkari Sanghatana along with various farmers’ unions have taken to the streets against the decision. On Tuesday, NCP president Sharad Pawar also wrote to Goyal urging the Centre to reconsider its decision.

The state Congress, meanwhile, announced it will continue its protests till the ban is reversed. The party staged protests across the state on Wednesday. Later, state Congress president Balasaheb Thorat said, “There is strong anger among farmers against this decision of the Modi government.”

Thorat said, “The Centre’s ill-advised move has come at a time when farmers were just coming out of the losses induced by the lockdown. It has resulted in sharp drop in onion prices and dashed the hopes of farmers.”

Wed Sep 16 , 2020
It will only focus on retail loans once it has whittled down its corporate book to zero. By Malini Bhupta IndoStar Capital Finance, a non-banking finance company, is exiting the corporate lending business after facing difficulty in raising funds. Currently, the financier has a loan book of Rs 10,000 crore. It […]