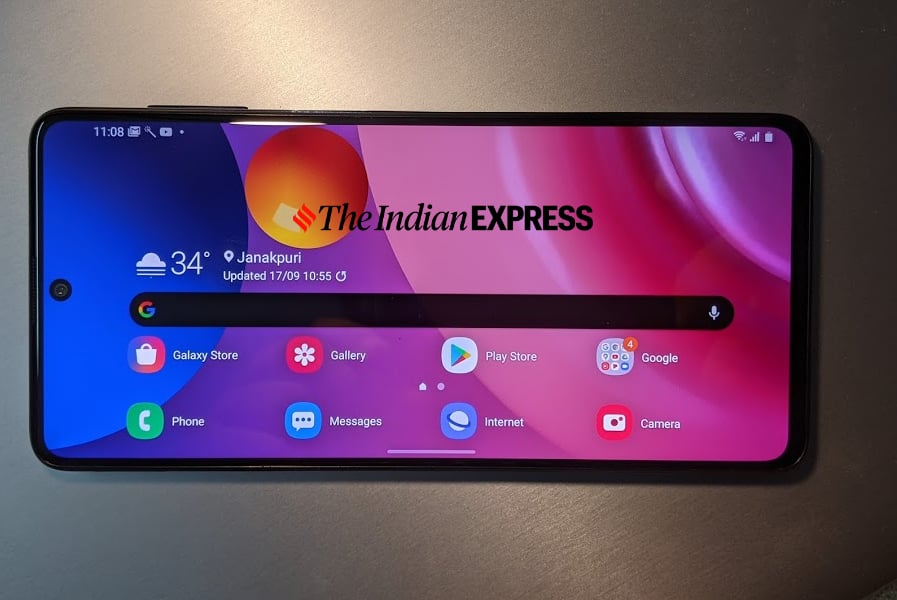 Samsung makes it clear that it’s end goal is to make the Galaxy M51 for everyone. (Image credit: Anuj Bhatia/Indian Express)

Sometimes it takes time to understand what the product is, how it will impact the end-user, and why it exists in the first place. And when you get the messaging, it’s easier to accept the product the way it is. That’s how I describe my experience with Samsung’s Galaxy M51. Even though the Galaxy M51 is a straightforward smartphone, that is by no means a drawback. The Galaxy M51’s simplicity is what convinces a regular consumer to buy a phone like this, despite having so many competitive devices available in the marketplace.

Here is our detailed review of the Galaxy M51.

At a glance, the Galaxy M51 looks almost identical to the Galaxy M31s and Galaxy A51 – two of Samsung’s most popular smartphones in the market. The shape and aesthetics of the Galaxy M51 are familiar with subtle curved edges and plastic build. No doubt, it’s an attractive phone with its super-slim bezels and the rectangular rear camera module on the top left – just like the Galaxy S20 series.

But yes, the Galaxy M51 is a huge phone with a 6.7-inch display. For people with smaller hands, it might be a bit too large. I could hold it in one hand and operate it comfortably. At 213 grams, the phone is on the heavier side because of its 7000 mAh battery. There are four cameras on the back of the Galaxy M51. (Image credit: Anuj Bhatia/Indian Express)

I really like the side-mounted fingerprint sensor embedded inside the power button on the right-hand side of the phone. The fingerprint reader is as quick as on previous Galaxy M smartphones. There’s also a USB-C port at the bottom that supports 25W fast charging. The bottom panel also holds the single speaker and 3.5mm headphone jack. A combination nanoSIM/microSD card tray on the phone’s right side lets you expand the internal storage. The review unit had 8GB RAM and 128GB storage with a microSD slot. 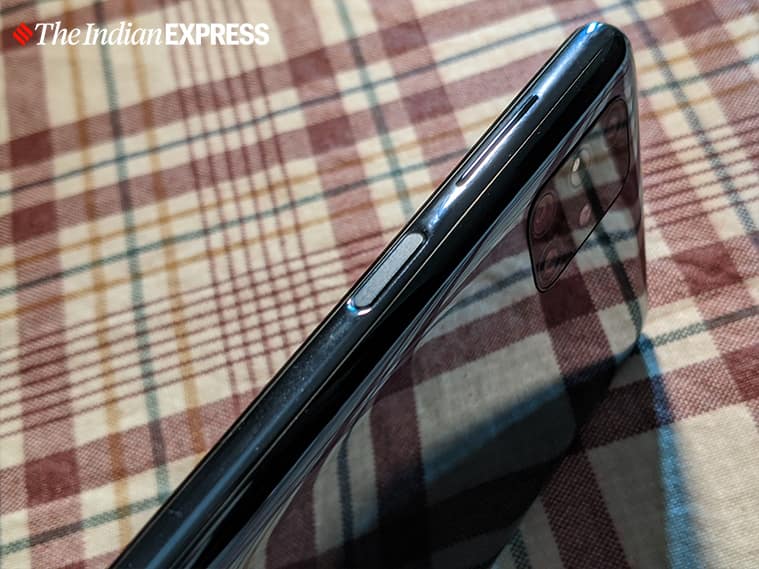 The Galaxy M51 does not offer an IP-rating for water and dust resistance. But that might not make a big difference for regular users.

The Super AMOLED Plus display has a hole-punch cutout in the middle for the front-facing camera. It’s a 6.7-inch display with a 20:9 aspect ratio and 2400×1,080p resolution. The screen looks fantastic with excellent viewing angles and vibrant colours. The screen stretches all the way to the top and bottom of the M51’s frame. It’s a regular flat display and not a curved one as seen on Samsung’s top-of-the-line smartphones such as the Galaxy Note 20 Ultra and Galaxy S20 Plus.

I am not a big fan of extra-large displays on phones, but I know people who have a thing for jumbo-sized screens. The Galaxy M51’s 6.7-inch screen size should be perfect for watching movies, playing games, editing a document, or running two apps at the same time. 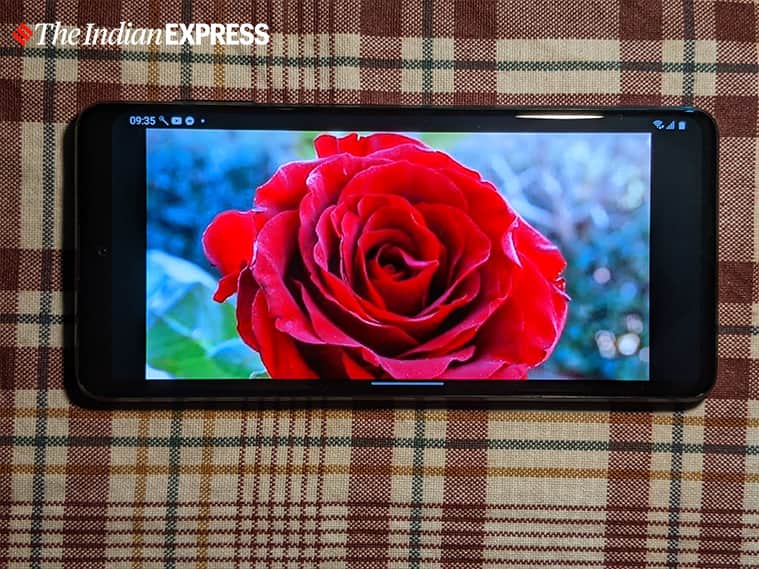 Performance of the Galaxy M51 is more than respectable. The phone uses a Snapdragon 730G processor, which is a mid-range chipset. The M51 performs flawlessly. I have never witnessed app crashes, screen freeze or stutter while running apps or playing games like Call of Duty: Mobile and Sonic Dash. There’s no 5G, and that’s okay. Call quality was good, but the speaker quality could have been better.

My favourite part of the Galaxy M51 is its battery life. The M51’s got the 7000mAh cell (yes, you heard that right!). With heavy use, I got through over a one and a half-day of juice before needing to plug in the charger back in the socket. Battery life will easily surpass two days if you use the phone moderately. The device charges using USB-C, Samsung’s 25W fast charger. It takes close to 100 minutes to fully charge the phone’s battery. 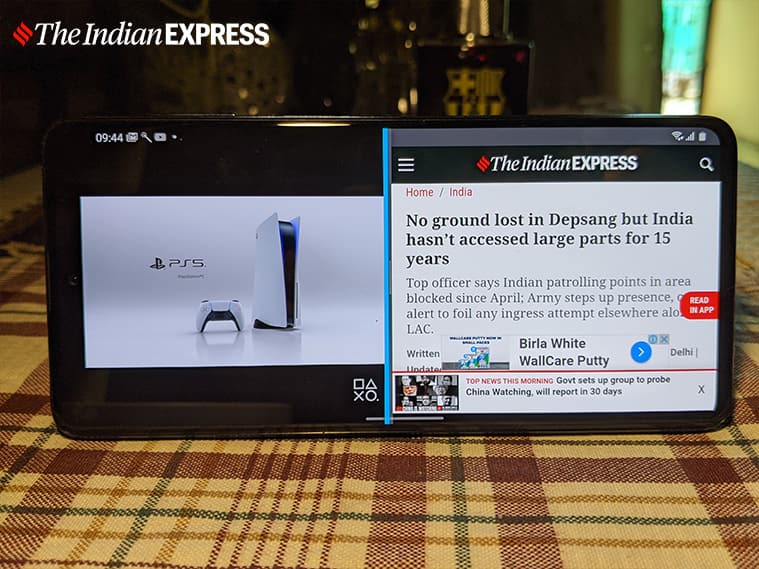 You can run two apps at the same time with the Split Screen view mode. (Image credit: Anuj Bhatia/Indian Express)

The Galaxy M51 has four cameras on the back; a 64MPmain camera with Sony IMX682 lens; a 5MP depth camera; a 12MP ultra-wide camera; and a 5MP macro lens. On the front, you will find a 32MP camera. The Galaxy M51 does paint a positive picture of the image quality you get on a mid-range phone these days. The pictures taken from the main camera deliver excellent quality – regardless of the time you capture them. I got the best shots in daylight. The images turned out to be sharp, with good colours and dynamic range. Sometimes the camera oversharpens images – but that’s so Samsung. Colours are a little more saturated – but yes, the camera does capture fine details. I think that’s what most consumers expect from their phone’s camera. 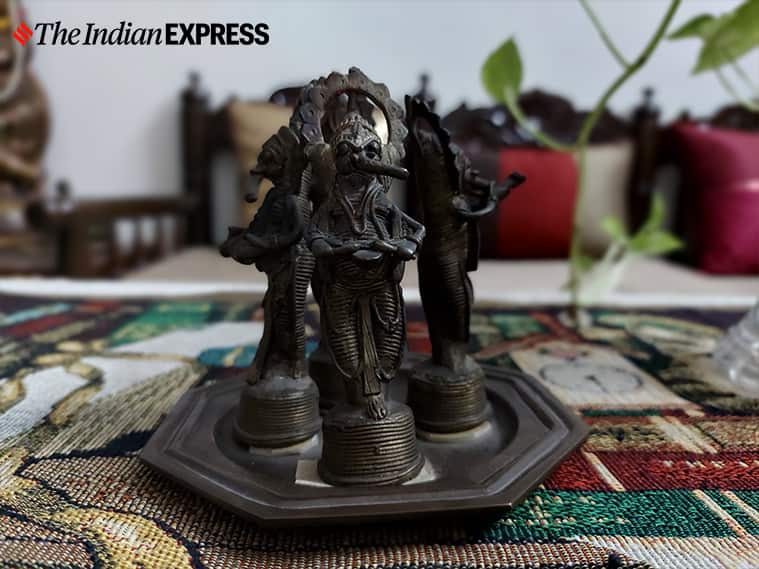 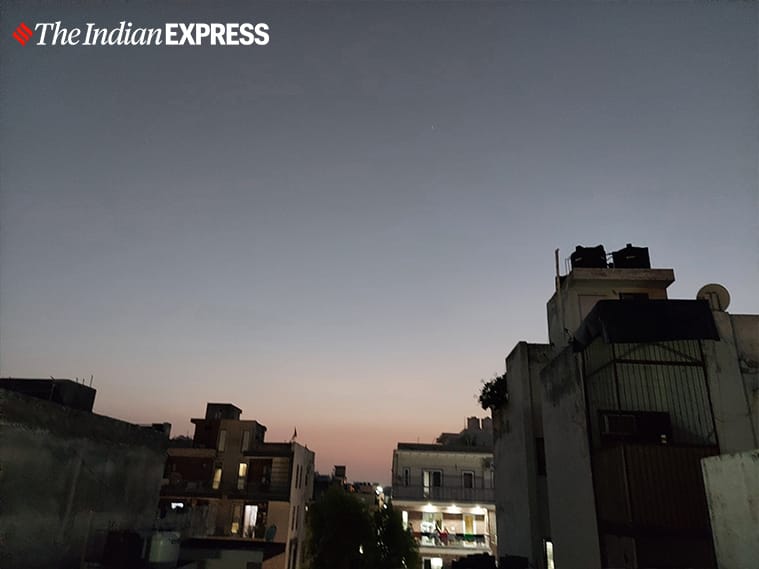 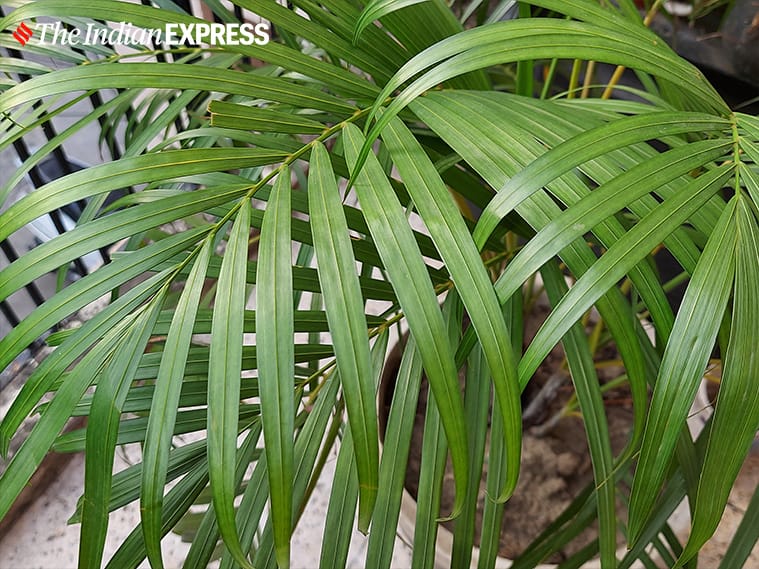 In low-light, the images were fine. The night mode comes handy when taking shots during the dark or extreme dark. I think most people will like the M51’s camera performance in low-light. 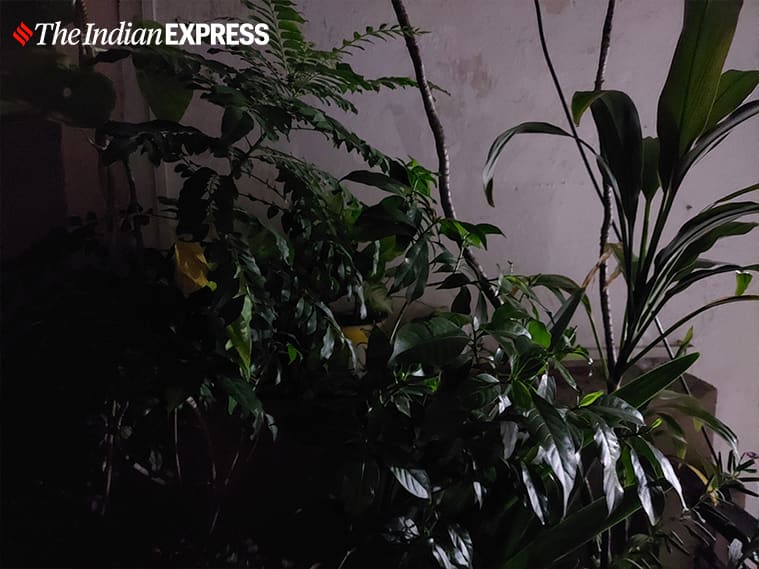 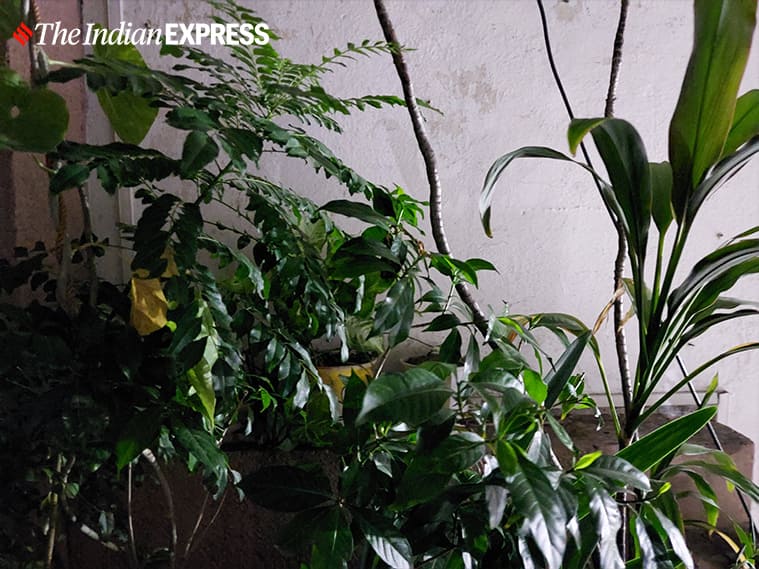 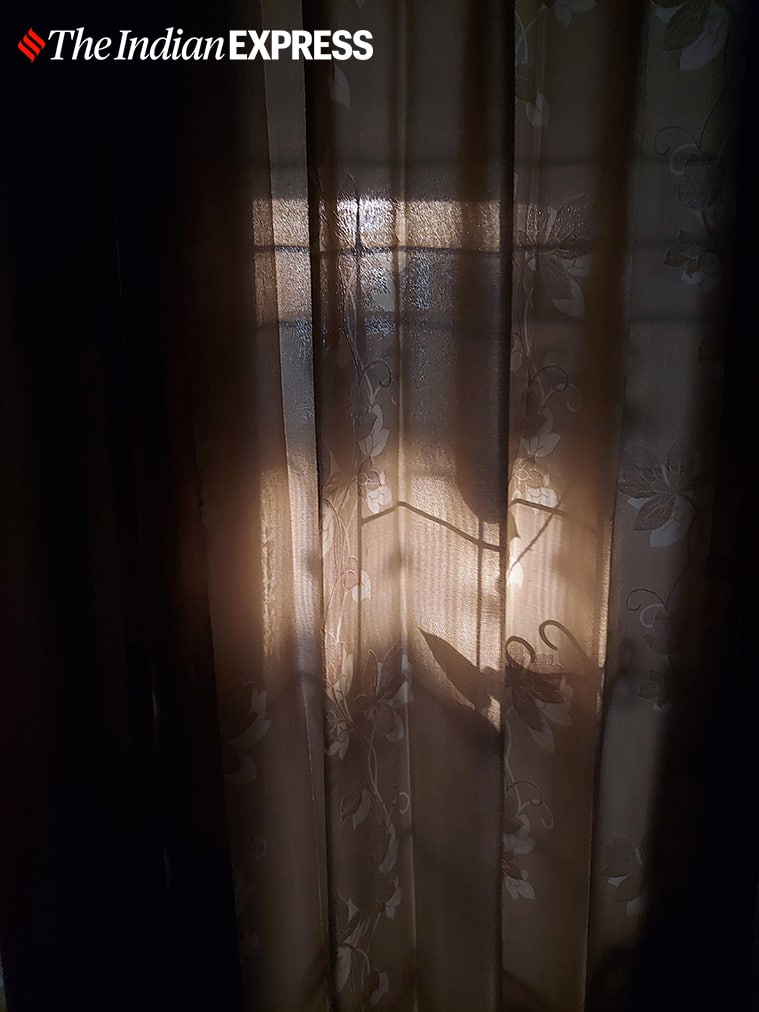 I shot this photo in the early morning. (Image credit: Anuj Bhatia/Indian Express)

Switching between different camera lenses is fast and quick. I had no problem autofocusing on the subject at different distances. The ultra-wide camera is excellent, too. Images are detailed and impressive. The dedicated 5MP camera produces improved portrait shots. The 5MP macro lens isn’t impressive. The front-facing 32MP selfie camera, though, is pretty decent. In low-light, too, selfies are detailed.
The Galaxy M51 records really good 1080p videos. Don’t worry, the phone can record videos even in fairly challenging lighting conditions. I couldn’t thoroughly test the Galaxy M51’s 4K video recording capabilities. 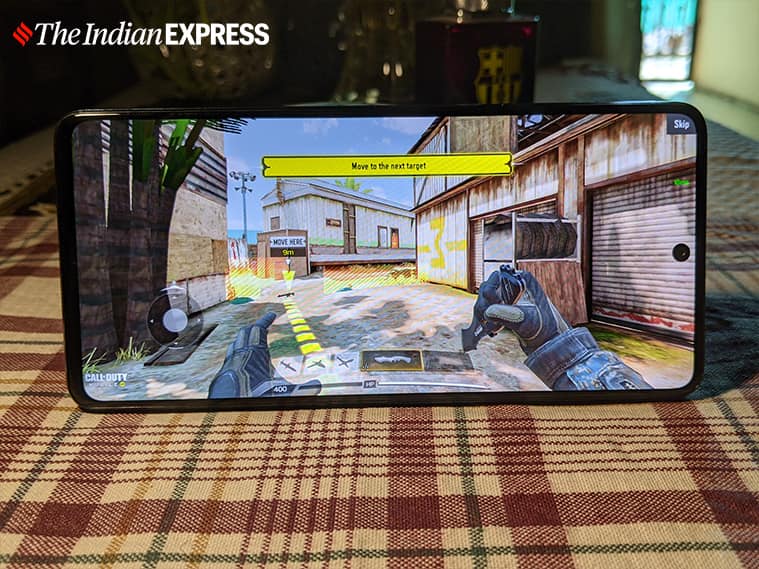 Playing a game like Call of Duty: Mobile is fluid on the Galaxy M51. (Image credit: Anuj Bhatia/Indian Express)

The Galaxy M51 runs Samsung’s native OneUI 2.0, which is based on Android 10. Look, the OneUI 2.0 has been massively improved, I still have some complaints about Samsung’s skin. I don’t get the concept of two app stores, two web browsers, and two voice assistants. I still don’t think anyone would use two voice assistants on a phone. Samsung Galaxy M51 review: Should you buy it?

With a 6.7-inch sAMOLED screen, Snapdragon 730G processor, 7000mAh battery, and capable quad cameras for Rs 24,999, the Samsung Galaxy M51 is definitely the most complete Android smartphone you can find in the mid-range segment. It’s exciting to see that Samsung is focusing on features that really matter to consumers at the end of the day like a bigger battery and display. I think the Galaxy M51 will appeal to everyone.

Walmart Foundation to the aid of Indian women farmers; to give $4.5 million boost amid pandemic

Thu Sep 17 , 2020
With the new grant, the foundation will help non-profit organisations Tanager and PRADAN to further ramp up their efforts to help farmers earn more from improved output and fair market access. Walmart Foundation has announced two new grants to help smallholder Indian farmers as a part of its commitment made […]