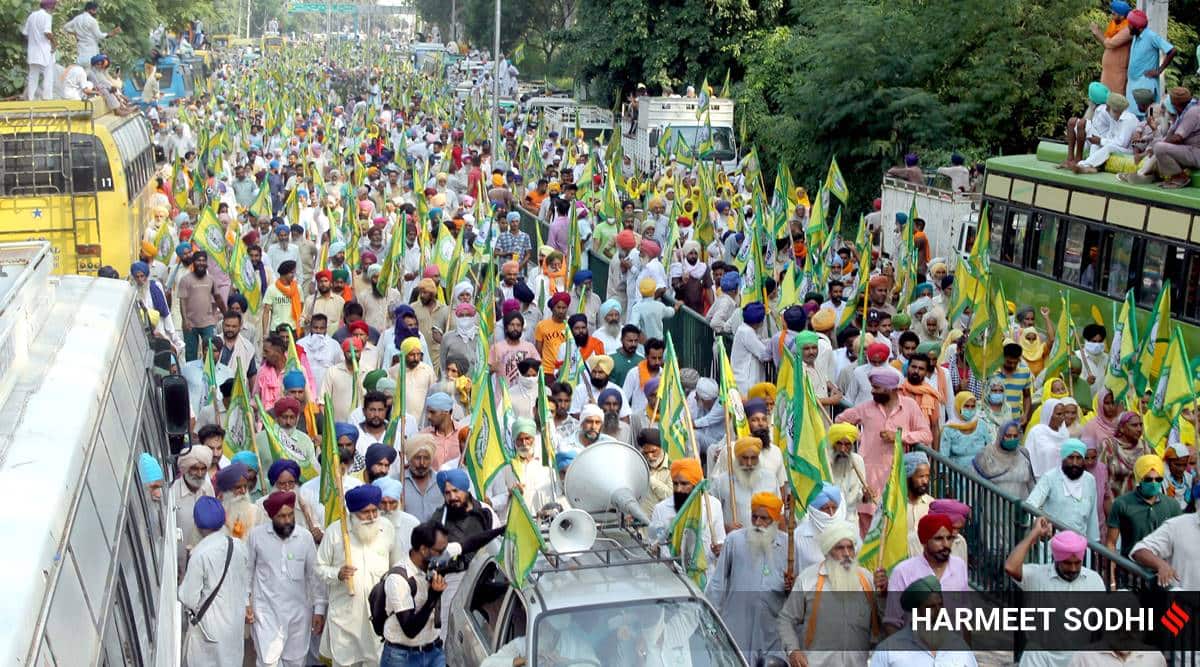 Protests against the Centre’s farm ordinances picked up pace in Punjab after a bandh call by 10 farmer unions for September 25 under the banner of the All India Kisan Sangrash Coordinator Committee (AIKSCC). A meeting in this connection was held at Karnail Singh Issru Bhawan in Issru village of Ludhiana Wednesday evening.

Apart from this, farmer unions have also given a call to all other such groups who are against the ordinances to come under a joint platform to have a discussion on this issue on September 19 at Moga. “Different farm unions are protesting at their own level, hence this is our effort to bring all of them on a common platform as we all are protesting for a common cause. We hope all of us will be part of this meeting on September 19, and we will add up our strength to fight against the ordinances of which one anti-establishment bill has already been passed by parliament on Tuesday,” said Buta Singh Burjgill, president of BKU (Dakaunda), who was part of Wednesday’s meeting.

Jagmohan Singh Patiala, working committee member of AIKSCC said, “On September 25, the Punjab bandh call was given to show our anger against the anti-farmer ordinances…This seems to be an era worse than Emergency as we have seen that time as well in our lives.”

He added, “We are not at all impressed by the speech SAD president Sukhbir Singh Badal gave in Parliament on Wednesday against the ordinances, but he had never been so clear when we met him at Badal village a few weeks ago.” Burjgill added, “We were told to mark the points against which we had objections and he will raise those issues before the Union government. We told him categorically that we were against the entire ordinance and it was not an issue of a few lines. This u-turn is eyeing 2022 polls in Punjab, otherwise, they could not raise their voice even once since June, when the ordinances were first presented.”

Apart from this, the ‘Pakka Morcha’ at Badal village as well as at the PUDA ground of Patiala entered its second day Wednesday as thousands gathered and are sitting day-night to lodge their protest. “We have blocked nearly 2 km of road close to former CM Parkash Singh Badal’s residence. On Tuesday night, nearly three thousand of us slept on the road. We cooked langar as well at the dharna site only, while cooked food is also coming from nearby villages,” said Sukhdev Singh Kokri Kalan, general secretary of BKU(Ugrahan), who started this dharna on Tuesday.

Talking about Sukhbir’s stand in Parliament, Kokri Kalan said, “It is a positive sign that at least he woke up from a deep slumber. However, we fail to understand that his wife being a Union minister was not even aware of such draconian ordinances despite the fact that Punjab is an agrarian state. During his meeting with farmer unions, he was not even that against ordinances.”

Talking about gathering of farmers in large numbers 24×7, he said, “We provide them masks and sanitisers, soaps to wash their hands and have also asked them to pratise social distancing. We farmers have put our lives at risk after coming on roads.”

Thu Sep 17 , 2020
A health worker takes swab sample at a mohalla clinic in New Delhi on Wednesday Describing it as the “most powerful public health tool” against the novel coronavirus, Robert Redfield, director of the Centres for Disease Control and Prevention (CDC) in the United States, has said face masks offered much […]