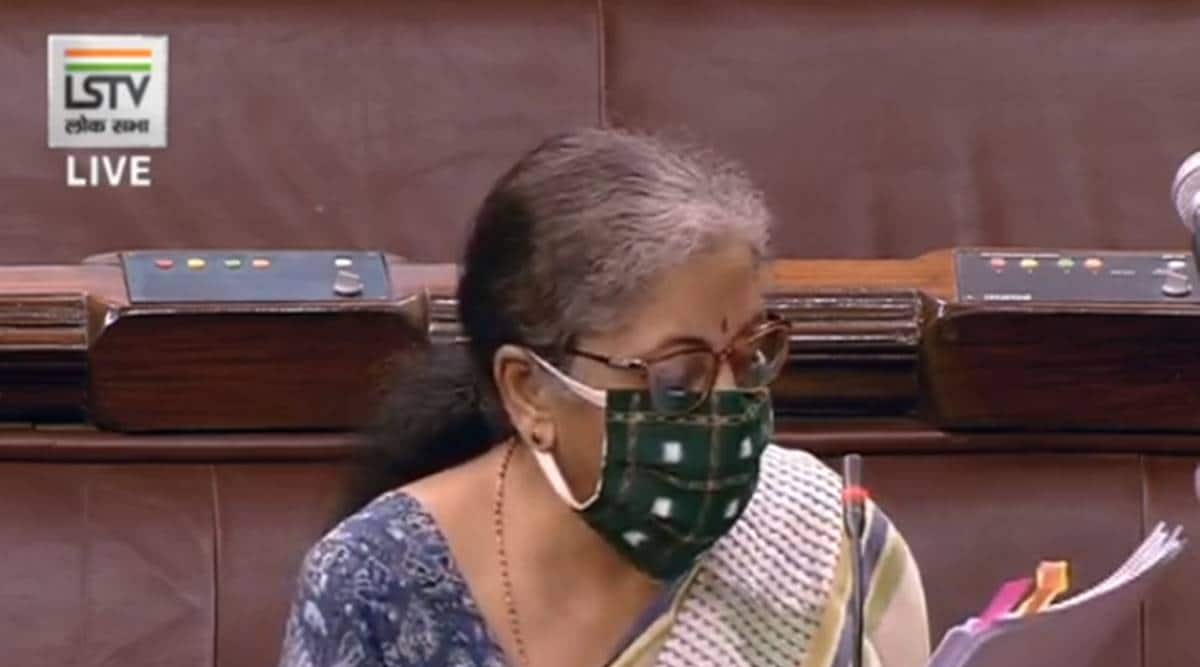 Tabled by Nirmala Sitharaman, the Banking Regulation (Amendment) Bill seeks to bring cooperative banks under the supervision of the Reserve Bank of India

On third day of the Monsoon Session of the Parliament, being held under the shadow of Covid-19,  the Lok Sabha passed the Banking Regulation (Amendment) Bill, which seeks to bring cooperative banks under the supervision of the Reserve Bank of India, even as the government’s statement in Rajya Sabha denying any infiltration by China in the last six months came under Opposition criticism.

A host of other issues ranging from India-China ties to Sushant Singh case were also discussed in the lower house. Responding to a query on India’s bilateral ties with neighbouring countries, Minister of State for External Affairs V Muraleedharan said relations with countries like Nepal, China, Bangladesh, Sri Lanka, Afghanistan and Myanmar haven’t deteriorated.

Here are other top developments from the Parliament today:

The Congress and DMK on Wednesday opposed the Banking Regulation (Amendment) Bill tabled in the Lok Sabha, stating that it infringes upon the rights of states. Urging the government to withdraw the bill, Congress’ Manish Tewari said resorting to the ordinance route to make laws “undermines the majesty of Parliament” and is an attack on the legislative institution.

“In a federal polity, this ordinance and the bill which seeks to replace (it), is a frontal assault on the federal structure of the Constitution and this will have long-term implications on the democratic polity of India,” Tewari said.

Congress members raised in both Houses of Parliament the alleged tracking of over 10,000 prominent Indian individuals and organisations by a Shenzen-based technology company with links to the Chinese government and the Chinese Communist Party. Congress asked the government to build an “impregnable firewall” to deal with the “digital aggression” by the neighbouring country.

Rajya Sabha Chairman M Venkaiah Naidu asked the Minister of Parliamentary Affairs to inform the minister concerned to “see what can be done and find out the veracity also” after Congress members K C Venugopal and Rajiv Satav expressed concern over The Indian Express report in this regard during the Zero Hour.

Leader of Congress in Lok Sabha Adhir Ranjan Chowdhury said China had been behind the spread of coronavirus, physical aggression in Ladakh and now “digital aggression”. “We are in clutches of China. Is the government not aware of it…Our national security is being shattered,” Chowdhury said. He requested IT Minister Ravi Shankar Prasad to build an “impregnable firewall to resist the new menace”.

Trinamool Congress member Pratima Mondal raised in Lok Sabha the issue of “heartless” reporting over the death of Sushant Singh Rajput and sought government guidelines for the media to report on suicide cases. Raising the matter in the Zero Hour, she said many countries have their own rules for the media for covering suicide cases or they follow WHO guidelines. The Union government should also come out with a national suicide helpline number, she said.

The government told Parliament that while it was committed to bringing a uniform civil code in accordance with a constitutional mandate, the issue required wider consultations. In a written reply to a question in the Lok Sabha, Union Minister for Law and Justice Ravi Shankar Prasad said according to Article 44 of the Constitution, the state shall endeavour to secure for the citizens a uniform civil code throughout the territory of India.

“The Government is committed to honour this Constitutional mandate. However, this requires wide-scale consultations,” he said. Bringing a uniform civil code in the country has been a promise made by the ruling Bharatiya Janata Party (BJP) in its election manifestos.

Accusing the Centre of not consulting experts to draw a strategy to deal with the COVID-19 pandemic, TMC MP Derek O’ Brien  said in Rajya Sabha that the Union government needs humility to work with states to move forward. Participating in a debate on ‘Covid-19 pandemic and steps taken by the Government of India’, he also said the Centre should not use the pandemic “to convert democracy into autocracy” and urged it follow best practices from states to deal with the crisis. The senior TMC leader also termed the PM CARES Fund as the most “opaque” fund in the world. “Did you consult global experts?” he asked on the government strategy to deal with the pandemic.

He said the West Bengal government had set up a global advisory committee and consulted epidemiologist. The state also set up isolation wards and quick reaction teams. He said out of every Rs 100 spent on public health, Rs 63 comes from the states and only Rs 37 from the central government. “The problem is when things are going good, you want to take the credit. When things are tough, you start talking about chief ministers,” he said.

A total of 3,005 cases were registered in the country under anti-terror law UAPA in 2016, 2017 and 2018 and altogether 3,974 people were arrested in this connection, Union Minister of State for Home G Kishan Reddy said in the Rajya Sabha on Wednesday.

In a written reply to a question, he said the National Crime Records Bureau (NCRB) is the central agency that compiles the data on crimes as reported by the states and Union territories and publishes the same in its annual publication “Crime in India”.

Pratapgarh: SDM suspended after he protests at DM residence

Adityanath: Rs 10-lakh aid for kin of mediapersons who died of Covid