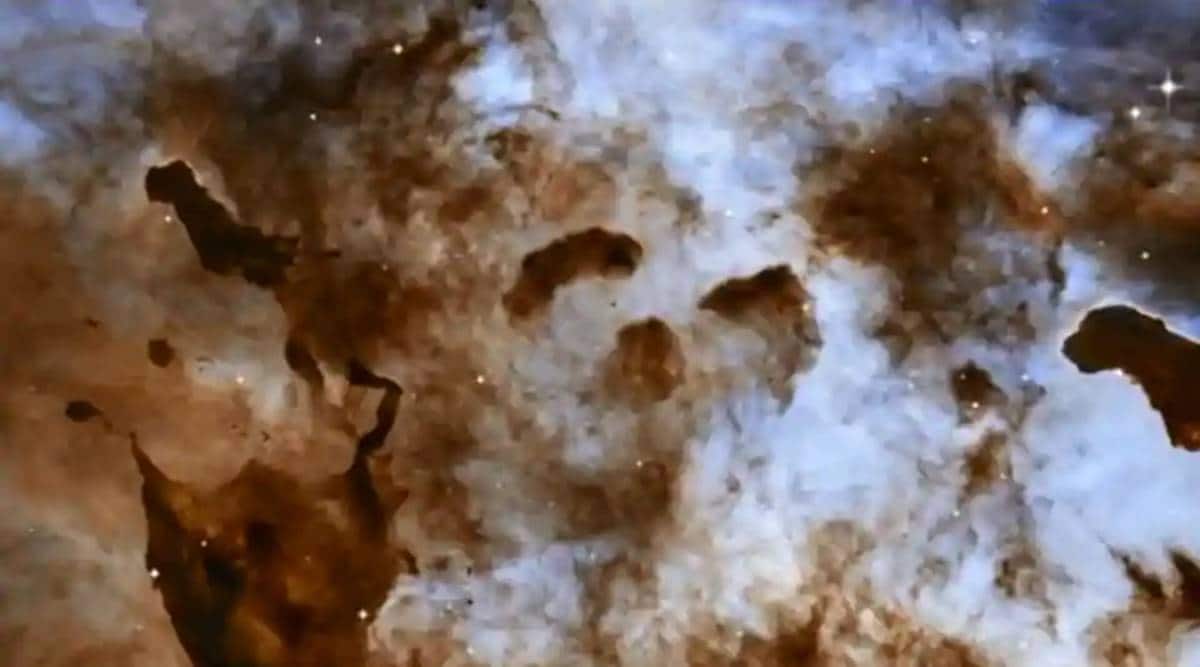 NASA recently took to its Instagram account where it shared tantalizing images which consisted of 3D visualization of dark pillars of cold gas in the Carina Nebula which created fantasy-like structures. Further, these bizarre structures were formed by the stars and nebula that were greatly compressed through their relative distance, eventually forming the enticing cosmic landscape as depicted in the video. As per NASA winds and radiation from massive stars in nebula carve away at these clouds, creating bizarre fantasy-like structures.

These dark pillars are mostly composed of gas and dust while they reside in a tempestuous stellar nursery called Carina Nebula which is located 7,500 light-years away in the southern constellation of Carina. It is mostly made up of a dense structure of stars that are hidden by a wall of gas and dust.

In addition, to the images of the Carina Nebula, NASA also shared the posts showcasing the ‘Sounds of the Universe’. Although the universe doesn’t possess any sound, it depicted the beautiful manifestation of the universe through sound but not images by a unique process called Data Sonification.

#HubbleClassic Explore dark pillars of cold gas in the Carina Nebula with this 3D visualization created from Hubble observations. Winds and radiation from massive stars in the nebula carve away at these clouds, creating bizarre, fantasy-like structures: https://t.co/0EXesaPROM pic.twitter.com/hDg2m7vrPF

Under this process, NASA assigned pitches to different to several stars and galaxies and shared their data which included the translation of digital data into images which is further transformed into sound. Moreover, NASA added in its post that the frequency of sound from the bottom to the top of the image ranging from 30 to 1,000 hertz. Besides that, Astronomical objects near the bottom of the image produce lower notes while those at the top produce higher notes.

Earlier NASA also produced the sonification data of the center of the Milky Way Galaxy as well. A usual, the translation began from the left side of the image and moved towards the right while the sounds represented the position and brightness of the sources.

Express Tech is now on Telegram. Click here to join our channel (@expresstechie) and stay updated with the latest tech news.

Sadhguru on meeting Will Smith: Pleasure to spend time with you and your family