Are patients in private hospitals or their families told that duty doctors at night in ICUs or working as emergency medical officer could be an ayurvedic or homeopathic doctor? Do they know that lakhs of rupees paid for the best of care could include being managed by a non-allopathic doctor?

Popular job sites are full of advertisements by some of the well-known hospitals, including corporate chains, seeking ayurvedic and homeopathic doctors to work as resident medical officers, emergency or casualty medical officers and even to manage ICUs at night. While Ayush practitioners may come at half the salary of MBBS doctors, patients admitted in these hospitals for “worldclass” treatments are not only unaware that Ayush doctors manage their care, their bills, too, do not reflect this cost-cutting measure.

The government has been pushing to train Ayush doctors to provide basic healthcare in rural areas where there is an acute shortage of doctors. But advertisements by private hospitals are for big cities where there is often a surplus of MBBS and specialists.

When contacted by TOI, most of these hospitals denied that their BAMS, BHMS hires were allowed to do clinical duties and said they were mostly for documentation work and for assisting allopathic doctors. However, many of the ads clearly state that the hiring is for clinical duties, which include intubation of patients, insertion of central line, assessing changes in patient condition, initiating emergency treatment, performing emergency and ICU procedures etc. 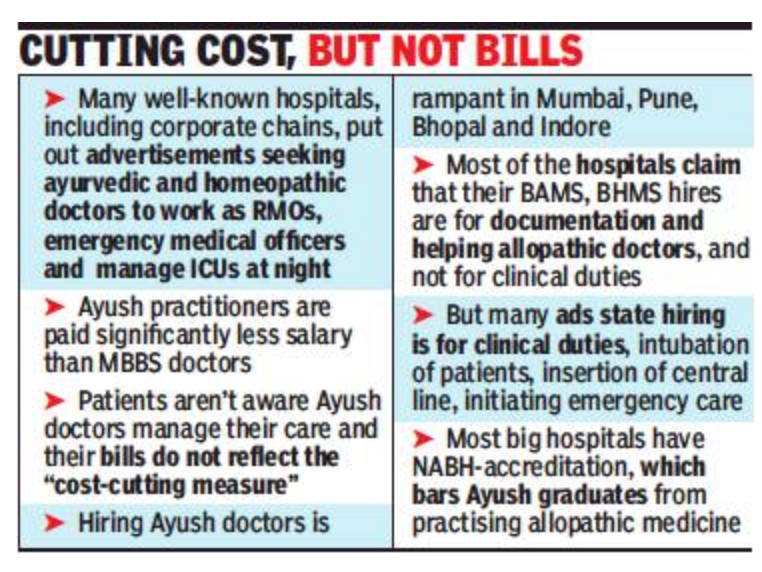 When this correspondent called up one of these hospitals posing as a currently jobless BAMS graduate with three years of experience, the HR person said the work would involve clinical duties in casualty, ICU and wards and “two nights per week and a rotational off ”. “The salary is Rs 18,000, but since you are experienced we can pay Rs 21,000 plus an extra Rs 3,000 per month for Covid duty,” said the HR person.
“MBBS graduates are paid between Rs 40,000 and Rs 45,000 by many of these hospitals. But they don’t even want to spend this much. So, they hire BAMS and BHMS or even Unani graduates who would come at less than half that cost. How low do they want salaries to go? What about the quality of care?” asked an assistant professor in a private medical college in Bangalore.

Most of these big hospitals are also accredited with National Accreditation Board for Hospital and Healthcare (NABH). “What is the accreditation worth if Ayush graduates with no licence to practice allopathic medicine are being employed to provide patient care? NABH supposedly assures quality of a hospital and that is why the rates for an NABH-accredited hospitals are higher,” pointed out a senior consultant at a private hospital in Delhi.

Dr Devi Shetty told TOI: “These doctors do not have the licence to practice allopathy. They cannot practice it.”
Former president of the Indian Medical Association, Dr Ravi Wankhedkar agreed. “This is illegal. We are opposed to this and the IMA has said this repeatedly,” he said.

“If I am paying Rs 1 lakh per day for care in such a huge five-star hospital, as a patient I have the right to know whether the doctor treating me is a vaid or homeopath. This is clearly cheating of patients. There ought to be a probe on whether using these doctors have led to higher mortality among ICU and Covid patients. Medical negligence by an allopath would mean a case before the medical council. What happens if a patient is harmed by something done by this Ayush doctor practising allopathy? Who will take the responsibility?” asked a doctor working in a corporate hospital.

“My mother was admitted to a top private hospital in Pune. To my horror, I discovered that the only doctors on duty at night were ayurvedic graduates. This is totally unacceptable,” said a medical college professor.

“It is rampant in places like Bhopal and Indore. Several hospitals were caught employing Ayush graduates for ICU duty at night in a sting operation in 2018, but the practice continues as the government has turned a blind eye. This is the low-cost model of private hospitals. But there is nothing low cost about their bills,” said Dr Anand Rai, an ophthalmologist and whistleblower in the Vyapam scam.
A prominent surgeon working in a private hospital in Mumbai, which has Ayush graduates in the ICU at night, however, argued that there was nothing wrong in employing these graduates if they were trained in the necessary skills. “They are a large workforce and we need to use them creatively. If they are skilled, they also ought to be paid better. It is about capability and not about which system of medicine they come from,” he added.

“A critically ill patient is someone who has complex pathophysiological problems and that is why they are in the ICU. Treating these patients requires an understanding of the complex disease process and treatment has to be modulated accordingly. It is wrong to allow a person trained in a different system of medicine like an Ayurvedic or Homeopathic who has a different understanding of disease processes to manage a patient in a critical condition,” said the head of the critical care department in a large charitable hospital in Delhi.