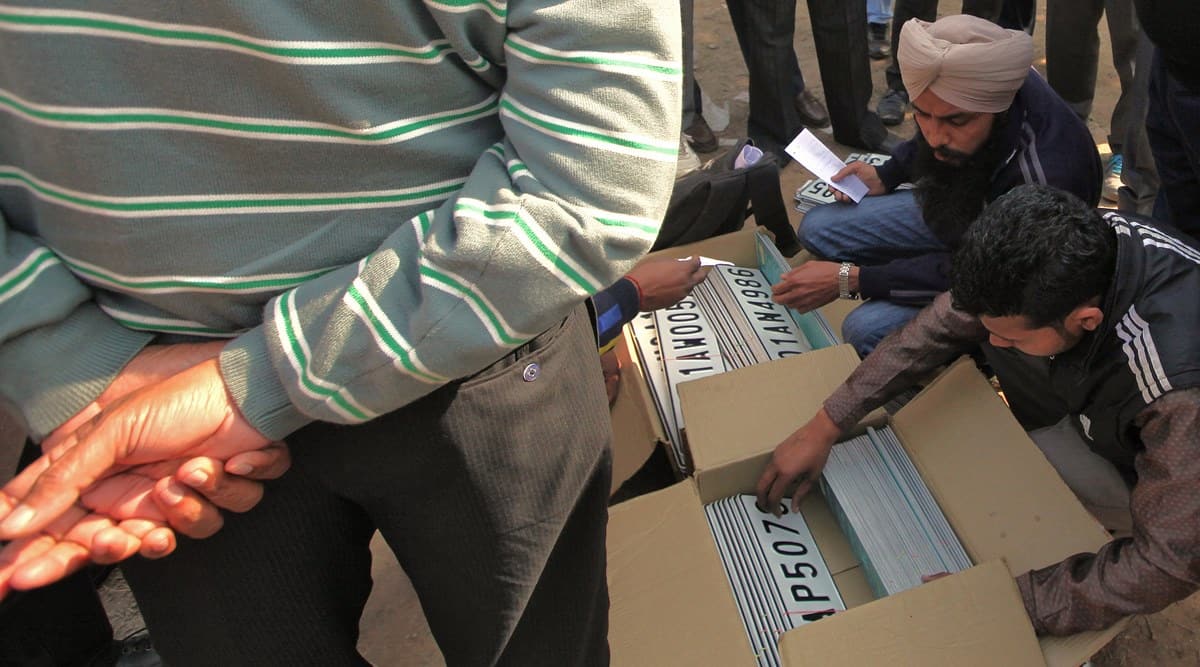 The irregularities came to the fore in 2016. (Express Photo/Kamleshwar Singh/Representational)

More than four years after a petition was filed in the Punjab and Haryana High Court over irregularities in issuing of fancy registration numbers, the state transport department hasn’t taken any action against five Punjab Civil Service (PCS) officers and five Assistant Transport Officers (ATO) allegedly involved in issuing these numbers for less than the prescribed fee.

The irregularities came to the fore when petitioner Gursahib Singh from Muktsar had filed a writ petition in 2016 against District Transport Officer-cum-Registering Authority, Ferozepur, Charandeep Singh issued registration numbers for vehicles for less than prescribed fee.

The high court took suo motu notice and asked the state government to check if the modus operandi was used across the state. The transport department found 177 such fancy numbers issued across the state, causing a loss of Rs 88,87,400 to the exchequer.

In the initial inquiry submitted by the state government, it was found that Charandeep Singh not only allotted fancy registration numbers much below the prescribed rate to various applicants but also to himself on payment of just Rs 1,000 against the prescribed fee of Rs 10,000.

“The affidavit filed by the state transport commissioner acknowledges the fact that all this was done and that RC bearing no. PB05X-1313 was allotted to one Charandeep Singh but does not disclose that he allotted the registration number to himself. Surprisingly, this affidavit has been also filed on behalf of Charandeep Singh,” reads the court order by Chief Justice Krishna Murari and Justice Arun Palli on October 28, 2018.

Effort made to save the guilty: Court

The court was unsatisfied with such admissions and said, “All sort of vague pleas have been taken before us to save the officer. Reference is made to an enquiry report in which he is given a clean chit recording that enquiry could not be conducted thoroughly in the absence of original record which was not produced in the enquiry proceedings despite the fact that there was no impediment in the way of Regional Transport Authority, Patiala, to have summoned the said record from Ferozepur. This makes it clear that a conscious effort was being made to save the guilty. This is only a tip of the iceberg in respect of one district of the state which has 22. It cannot be disputed that a huge loss has been caused to public exchequer. Despite this court having taken cognizance of the issue, the correct facts are not being placed before us.”

A committee was constituted under the chairmanship of the additional state transport commissioner which examined 177 cases of allotment of fancy numbers illegally across the state and submitted as status report which again didn’t amuse the court.

The court also asked about action proposed against those officers who were on deputation with the transport department and steps to be taken by the department for retrieving the numbers which were wrongfully and illegally allotted.

“Status report filed by respondent, the State of Punjab, is highly unsatisfactory. The details of the disciplinary enquiry have not been disclosed. Instead of proceeding to take action on criminal side, a unique method has been adopted to bypass the issue by sending the matter to the Advocate General for his opinion. On the asking of learned Senior Deputy Advocate General, Punjab, we grant a week’s time to file a better status report,” reads the order on May 14, 2019.

In pursuance to to the order dated October 25, 2018, passed by the High Court, all 11 RTA’s and 11 SDM’s being registering authorities were asked to furnish information on whether any fancy registration number has been allotted below the reserve price. A total number of 177 cases came to the knowledge in which fancy registration numbers had been allotted at price lower than the fixed reserve price. The total amount involved was Rs 88,87,400 out of which Rs 27,800 recovery was made by November 30, 2018.

The documents relating to 40 registration numbers were in order and there was no violation of any rule/regulation. After receipt of notices, owners of 15 vehicles as mentioned deposited the deficient fee. In 19 cases, RCs had been canceled.

The remaining 103 cases, it had been found that owners were issued notices and failed to deposit the prescribed fees. The department had recommended that the RCs be canceled.

On delay in action, Principal Secretary K Siva Prasad said, “Action is pending as we are verifying the facts brought out by these officers in response to the chargesheets issued to them by the department.”

Asked what opinion the advocate general gave on criminal proceedings against officials, he said, “I will need to check the records.”

Thu Sep 17 , 2020
SMP prices at the GDT auctions had crossed $3,000 per tonne in December-January, levels that were last seen in August 2014. Harish Damodaran, The Indian Express International skimmed milk powder (SMP) prices have hit a seven-month high. That’s good news for Indian dairy producers, with the ‘flush season’ (when animals, […]