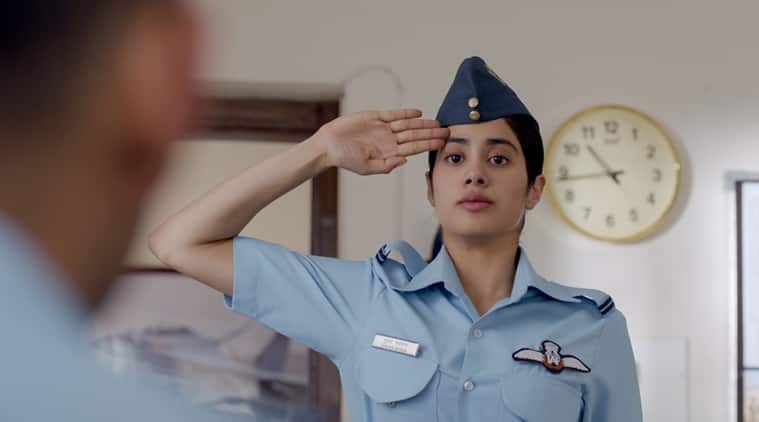 Gunjan Saxena: The Kargil Girl will premiere on Netflix on August 12.

The story of the first Indian Air Force woman pilot who was part of the 1999 Kargil conflict is ready-made movie material, and a great hook: who is Gunjan Saxena, and what made her want to fly so bad that she braved concerted antagonism in a tough male-dominated field?

The Lucknow-born Saxena, played by Janhvi Kapoor, is sky-struck from an early age, fighting for a window seat with her older brother (Bedi) during a flight, pulling away from the conventional route of good girls getting a degree-and-getting married, and being buoyed by a supportive father (Tripathi), in her determination to become a pilot.

We know that the real Flt Lt Saxena, who retired as Squadron Leader in 2004 as permanent commission was not available at the time, was on board with the creation of her reel version. So authenticity, whether it is the technical stuff Gunjan has to learn, or the military terminology she has to master when she gets to the Udhampur airbase, just ahead of the Kargil ‘war’ breaking out, is not so much an issue. The film was always going to be judged on whether Kapoor is able to carry off the author-backed role, and whether the film soars.

On both those counts, Gunjan Saxena: The Kargil Girl is a mixed bag. What’s nice is the restraint, and lack of fuss with which the film is done. Trumpets don’t blast our ears every time there’s a sortie, even though Gunjan does get her backlit ‘Top Gun’ moment, as she strides out to the field from the hangar, uniformed and ready to go. The difficulty of being a lone female amongst a bunch of young men, bristling under the pressure of having to salute a woman, or having to watch their tongue, is all there. But staying away from high-pitch shouldn’t come off as lack of drama: even as the film follows its required beats, with Gunjan struggling against the standard ‘fauji’ what-are-women-doing-here misogyny, training and finally being able to take off, fighting off the enemy and rescuing injured colleagues, it stays a tad too sedate. We see Gunjan flying into peril, but our hearts are never in our mouths.

As for Kapoor, she does get better as she goes along, but performance-wise, she is still clearly a work-in-progress. She was excellent in her small part in Lust Stories, and going by that, I was expecting more. In a smart move, there’s no visible pancake, and the flyaway hair and uniform worn as one, not a tightly-clinched costume, makes her look real. She is the unmade-up lodestar around which the film and its characters revolve, and the supporting cast is solid, even if defined only by what it can do for Gunjan. Tripathi, as the real wind beneath her wings, is too good an actor to be hidden, but everyone else, including Bedi who is given clunky lines around worrying about ‘Gunjan’s ‘suraksha’, Vij, as a senior officer who backs her, or Vineet Kumar Singh, a co-pilot who moves from hostility to like, could have been written with more depth, and flavour.

The best part though, and for which the film truly deserves a medal, is its choosing to steer clear of chest-thumping, flag-waving, ugly jingoism. In a throwaway line, the girl who wanted to be pilot says: I only want to fly. Could the film have been better? Undoubtedly. Women following their dreams against patriarchal odds? Absolutely.

CSK vs DC: MS Dhoni says CSK not doing well both in batting and bowling