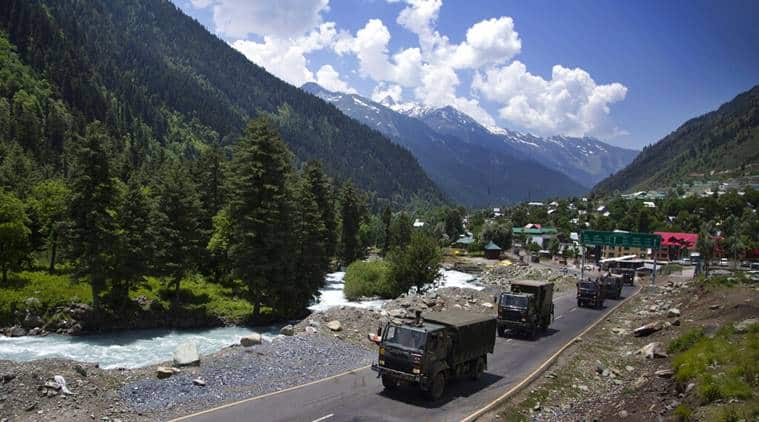 An Indian army convoy moves on the Srinagar- Ladakh highway at Gagangeer, northeast of Srinagar. (AP)

As it works with Beijing to reduce tensions along the Line of Actual Control in Ladakh, New Delhi has decided on a four-pronged disengagement approach: lower the public rhetoric, temporarily suspend patrolling of buffer zones by either side, mount sustained surveillance and reconnaissance of friction points, and keep adequate troops in depth areas until the process is completed.

This four-pillar approach, which had been in the works since the June 24 meeting of the Working Mechanism for Consultation & Coordination on India-China Border Affairs and the June 30 meeting of Corps Commanders on the two sides, was firmed up at a briefing by National Security Advisor Ajit Doval to Prime Minister Narendra Modi following the Special Representative-level talks with Chinese State Councillor and Foreign Minister Wang Yi on July 5.

Besides the Prime Minister and the NSA, External Affairs Minister S Jaishankar, Defence Minister Rajnath Singh and Home Minister Amit Shah were instrumental in finalising this approach. It was done between the evening of July 5 and the afternoon of July 6.

The Indian Express has been told about these approaches to the disengagement exercise:

Officials said the Chinese have to keep their word on the disengagement. In fact, the two sides decided to issue their statements almost 20 hours after the meeting between the Special Representatives on July 5. This allowed the leadership in New Delhi and Beijing to approve the understanding reached.

“So, there was time of about 12 to 15 hours to approve all the understandings between the two SRs, and also see some of the process unfolding at the LAC,” a source said on the time-lag between the July 5 meeting at 5 pm and the statements issued around 3 pm the next day.

Gender-ratio improves in IIM-Kozhikode, admits over 50 per cent women in PGP batch

Wed Jul 8 , 2020
By: Education Desk | New Delhi | Updated: July 6, 2020 1:38:38 pm IIMs have a higher number of female enrollment  (Representational image) It seems this year, the IIMs have improved gender diversity on the campuses. IIM-Kozhikode claims that this year’s PGP-24 batch is also one of the most diverse […]