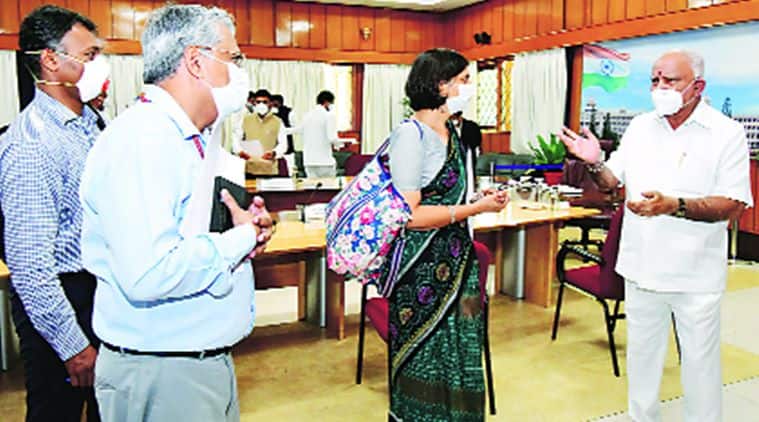 Karnataka Chief Minister B S Yediyurappa with the Central team, in Bengaluru on Tuesday. ANI

A Central team which visited Bengaluru on Tuesday to assess the response by the Karnataka government to tackle the Covid-19 pandemic has advised the state to scale up testing in order to bring the spread of the virus under control.

“They discussed a lot of issues on how to tackle the spread of the virus. One thing they said is that the more you test, the better you can control the spread of the disease,” said Medical Education Minister Dr K Sudhakar, who was part of the meeting.

The Central team said the focus should be on the testing and care of the elderly, children and those with co-morbidities, along with testing at crowded places. It also advised the state government to strongly enforce containment zone rules and to ensure that all primary and secondary contacts are tested, the minister said.

The state has been testing only around 15,000 samples on a daily basis, with a peak of 18,307 tests on June 2. While states with heavy Covid-19 caseloads like Delhi and Tamil Nadu are testing 29,750 persons and 15,393 persons per million, respectively, as of July 5, Karnataka’s figure is at only 9,741 per million, though it is still higher than the national figure of 6,946 per million.

“We are planning to take testing upto 40,000 tests per day in a short while,” Sudhakar said. “They (the Central team) appreciated the efforts of Karnataka in the initial phase but after the unlock, there has been a spread of the disease. They have asked us to take precautions and to not worry about large numbers of people testing positive since it is important to test more to reduce deaths. The success of tackling the disease lies in testing more is the view.”

“The death rate in the world is more than 4.5 per cent, in the country it is 2.5 per cent, while in Karnataka it is only 1.56 per cent and our efforts will be to bring this below 1 per cent,” Sudhakar said.

Wed Jul 8 , 2020
India is in the company of Pakistan, Russia, Saudi Arabia, Egypt and Kuwait, as countries that maintain they have not reached the community transmission stage despite having over 50,000 cases of Covid-19 and averaging more than a thousand new cases a day over the last seven days. Of these, India […]