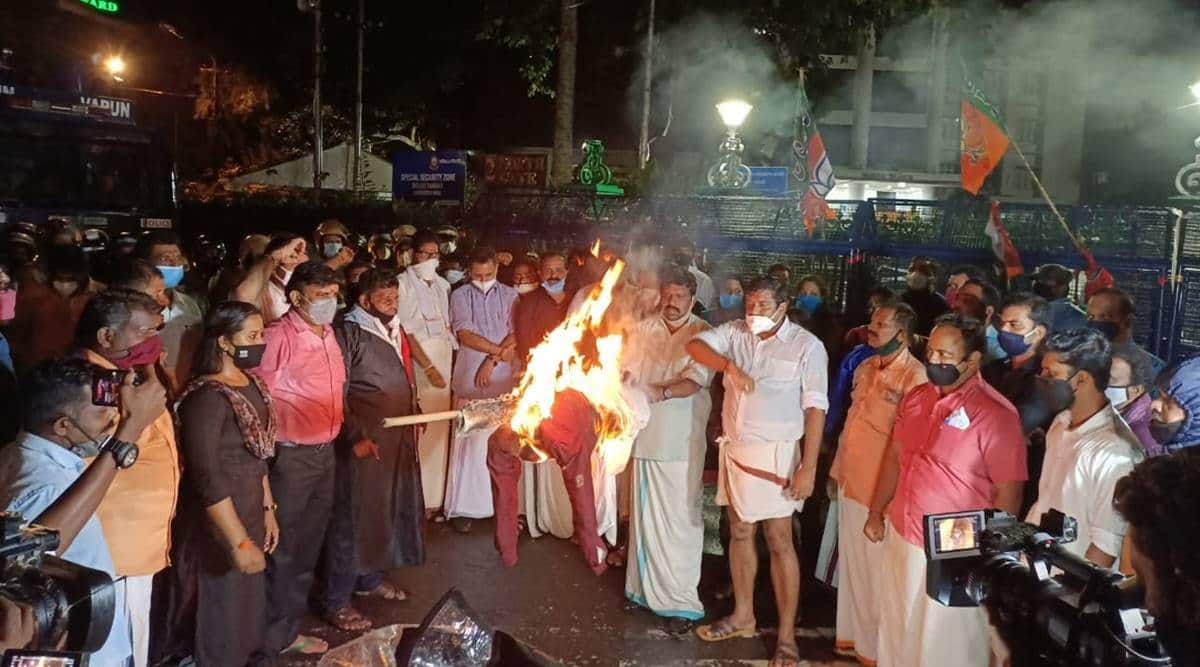 While Opposition Congress and BJP continued to stage protests across Kerala, demanding resignation of state Higher Education Minister K T Jaleel after he was questioned by the Enforcement Directorate (ED) in an alleged FCRA violation case, Chief Minister Pinarayi Vijayan on Tuesday backed Jaleel and said he has not committed any mistake.

“The ED questioning him need not be seen as a big issue. Giving the Quran cannot be seen as a mistake. But certain people feel that (distributing Quran) is a mistake – even IUML (a Congress ally) feels so. If Jaleel is involved, the Quran becomes untouchable for IUML,’’ Vijayan said.

With both BJP and the IUML engaged in separate agitations, demanding Jaleel’s resignation, Vijayan said, “Things are being manoeuvred in a way that is not suitable for Kerala. A character known as Jaleel is being created to serve the agenda of IUML and BJP alike. Everyone should realise that this is Kerala,’’ he said.

Vijayan’s reaction comes close on the heels of Jaleel’s comment that he is ready to resign as minister if IUML state president Panakkad Sayed Hyderali Shihab Thangal demanded so. Thangal is also an influential Muslim community leader.

But IUML national general secretary P K Kunhalikutty MP told the media that Jaleel is facing the allegation of smuggling under the guise of religious texts. “His bid to bring Thangal into the issue is part of a strategy to divert the issue. We are not going to fall into that trap.’’

The Opposition protests began on Saturday, a day after Jaleel was questioned by ED, which is probing into money laundering under the guise of smuggling and import of contraband. While probing into the gold smuggling case, it was revealed that Jaleel was allegedly involved in importing Quran from the UAE and taking consignments by government vehicle to his home district, Malappuram, for distribution.

As several instances of gold smuggling through diplomatic channel were found during the probe, the ED and the Customs department suspect gold might have been smuggled in the guise of religious texts.

Ashokan Charuvil, state general secretary of Purogamana Kala Sahitya Sangham, the CPI(M)’s cultural wing, maintained that the allegation against Jaleel should be seen as a continuation of the BJP and Sangh Parivar’s “hate campaign” against Muslims during the anti-CAA protest earlier this year. “Although the Quran has no links with gold smuggling, they think repeating a lie for a hundred times can create an illusion of truth,” he said. “The Sangh Parivar has succeeded in using the Congress, the IUML and the right-wing media for its heinous campaign against Islam.”

Ever since the Congress and the BJP began protests against the LDF government over the gold smuggling case, the CPI(M) has accused the Congress of reducing itself to the BJP’s “B team”.