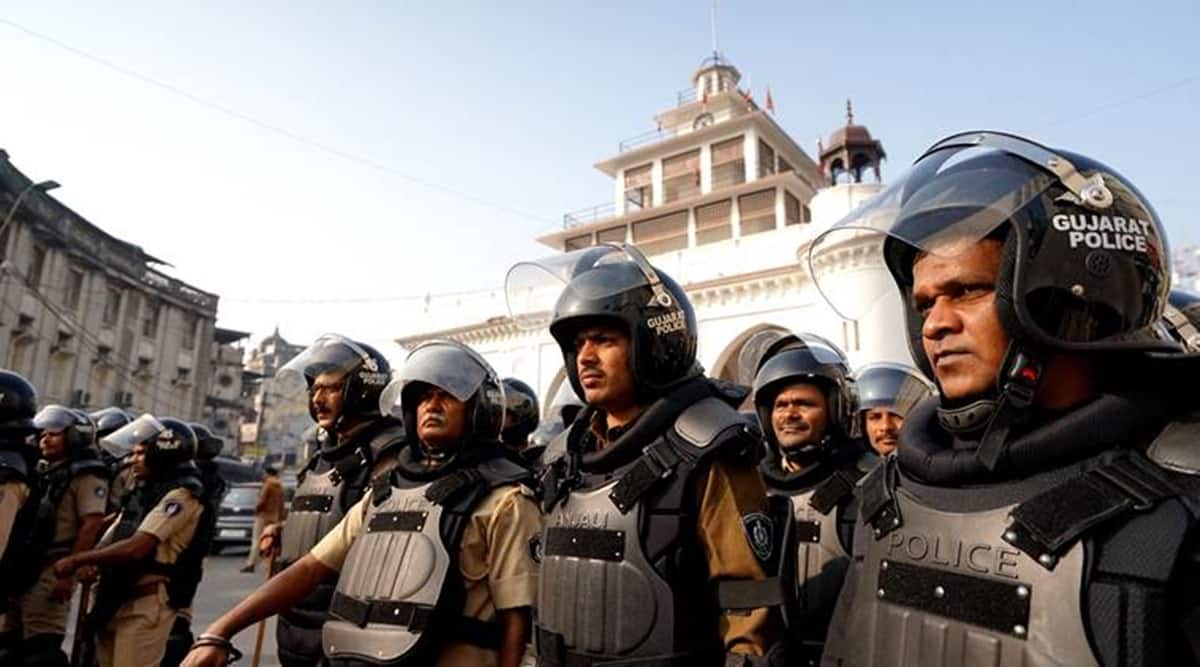 Since Friday, hundreds of local tribal youth have been on protest, demanding filling of unreserved seats in teachers’ enrollment in Rajasthan with scheduled tribe (ST) candidates. (Representational)

Police in five districts of Gujarat that share border with Rajasthan remained on high alert on Sunday in the wake of a violent protest and arson by tribal youth of Udaipur in Rajasthan, even as the situation improved later in the night when the agitation was called off and the National Highway 48 (Ahmedabad-Udaipur) was opened after three days.

Since Friday, hundreds of local tribal youth have been on protest, demanding filling of unreserved seats in teachers’ enrollment in Rajasthan with scheduled tribe (ST) candidates.

Traffic on the highway has been redirected towards the Palanpur-Amirgadh-Abu Road route for the past 72 hours, as per the Gujarat police.

ML Lather, DG (Crime Branch) of Rajasthan Police, said that “the highway has opened now”. Till Sunday, 21 FIRs were registered in connection with the violence and protests that began on September 24. “We have arrested more than 40 persons so far,” he said.

The Gujarat Police officials said that they will keep diverting traffic to Abu road on Sunday night till official communication is given.

As protesters blocked a stretch of the 78-km Ahmedabad-Udaipur highway near Kherwara in Rajasthan, Gujarat police blocked the particular highway route for vehicles from Gujarat to Rajasthan (vice versa) and created diversions.

Police forces in five border districts – Banaskantha, Aravalli, Sabarkantha, Mahisagar and Dahod – were deployed on the highway to deter entry of vehicles towards Udaipur and vice versa from Friday to Sunday night. On Saturday night, police in Aravalli arrested a man for throwing stones at vehicles headed from Gujarat to Rajasthan near Shamlaji in Aravalli.

On Saturday and Sunday, the protesters clashed with Rajasthan police while being stationed atop hills as the entire stretch of Kherwara in Udaipur is dominated with hilly landscapes offering a vantage point to the protesters.

As the local administration struggled to contain the violence, which began after a fortnight of dharna, Rajasthan Chief Minister Ashok Gehlot held a meeting on Saturday evening. Following the meeting, Lather, Jaipur Police Commissioner Anand Srivastava and Additional DG, Anti-Corruption Bureau, Dinesh M N, among others, were flown to Dungarpur.

Since Saturday morning, Gujarat Police started diverting vehicles towards Rajasthan ahead of the Ratanpur border at Ansol in Sabarkantha and Shamlaji in Aravalli.

Speaking to The Indian Express, Chaitnya Mandlik, Superintendent of Police, Sabarkantha, said, “For the past 72 hours, we have been diverting vehicles on NH48 towards Abu road. …till now no incident of violence on the Gujarat side has been reported.”

Sanjay Kharat, Superintendent of Police in Aravalli, said, “We have been blocking all vehicles to and from Rajasthan and Gujarat on the Shamlaji route. On Saturday night, two to three Gujarat vehicles were stone pelted on the highway near Shamlaji and we registered an FIR in the matter. One person has been detained for the attack, but we are not sure whether he is one of the protestors as he was also found in a drunken state.”