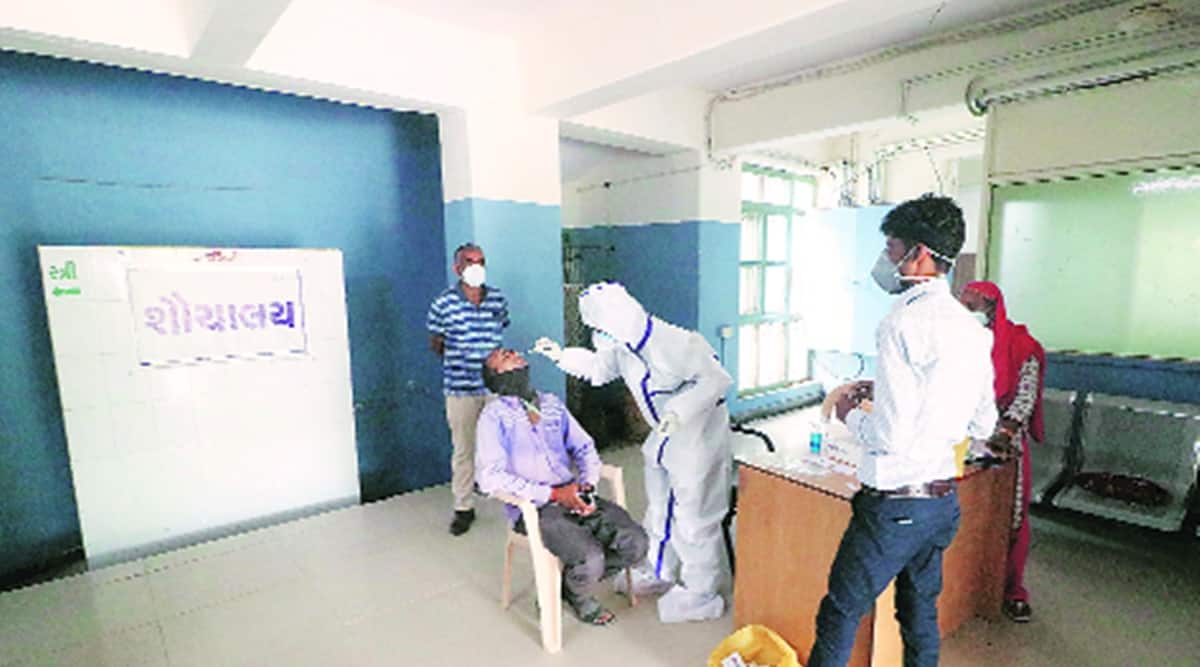 Among the new cases, 269 were reported from Surat, including 160 from urban and 109 from rural areas, even as two succumbed to the virus, taking the district toll to 747.

This was followed by Ahmedabad with 197 fresh cases and three deaths. So far, Ahmedabad has reported 35,246 cases and 1,803 deaths. Rajkot reported 171 cases, including 112 from urban and 59 from rural areas, and one death.

Vadodara reported 133 new cases on Sunday, while one death each was reported in district and municipal areas. So far the district reported 11,476 cases and 192 deaths.

Warning youngsters of stringent action for violating Covid norms and gathering in huge groups in the evenings and late night, the AMC said that the callous attitude of residents will result in infecting their family members and putting their life at risk.

In a special drive conducted on September 25, the AMC shot a video of violations across the city, based on which the civic body decided to take stringent steps. Large number of youngsters were found gathering on Sindhu Bhawan road, Prahladnagar road, IIM road, SG highway and SP Ring road, violating Covid norms.

“Most of these youngsters, if infected would be asymptomatic… But they are increasing the chances of infecting senior citizens and other family members at home and putting their lives at risk… the Ahmedabad Municipal Corporation is continuously taking all possible steps to prevent the spread of the virus in the city. After the violations and carelessness of youth came to the fore, AMC decided to take more drastic and concerted action…,” the statement stated.

Based on the prevailing guidelines, the AMC has prepared SOPs for shopping malls, hotels, clubs, religious places among others. The Solid Waste Management (SWM) department has formed more than 192 teams for 48 wards and seven administrative zones for effective implementation of the SOPs.

Along with police, these teams visit different places of the cities and penalise units and persons if found violating the SOPs.

In combined drives by the Ahmedabad Municipal Corporation (AMC) and city police against Covid guidelines violations, more than Rs 5.5 crore has been collected as penalty since May. People are still not following the standard operating procedures and rules, stated a statement from the AMC on Sunday.

Among the total amount, Rs 1.88 crore was collected from more than 50,000 shops, commercial units and vendors, while Rs 31.41 lakh was recovered from 90 big and popular establishments, including Ahmedabad One Mall in Vastrapur, Osia Hyper Market in Nikol, One Mart Mall in Sarkhej, D-Mart in Ranip, National Handloom in Navarangpura, Murtimant Complex in Khadia and Mc Donald Pizza that were temporarily sealed.

A fine of Rs 2.24 crore was collected from around 4.5 lakh residents who were not wearing mask in public. An additional Rs 27.21 lakh was levied on 6,949 individuals who were found spitting in public places.

As many as 603 pan masala and tobacco shops were sealed and Rs 38.61 lakh penalty recovered.

Around 35 tea stalls were sealed and more than 1,200 others closed voluntarily.

Sun Sep 27 , 2020
Undoubtedly, the switch to smart metering will present challenges. By Rahul Prithiani The current crisis in the power distribution sector offers a great reform opportunity even as it reiterates an urgent need – to switch en masse from traditional to smart meters. Financially stressed power distribution companies (discoms) are staring […]